I’d like to introduce you to a murder. There’s nothing particularly heinous about it, and apparently, it doesn’t even stand out to officials enough to update the public on the status of the case.

I’d like to take you back to my hometown of Shepherdsville, Kentucky again. Within this suburb of Louisville, there are nice areas and there are working class areas. There are farms and there are subdivisions. I grew up in a subdivision. Fox Chase is considered a 6th class city because it has 999 residents or less; (447 as of 2010, and nearly all of them are white). In the pre-antebellum era, the land belonged to the Rogers who ran a plantation. Lillian Chase, the great granddaughter of the original plantation owner, sold it to developers in the 70s. Fox Chase was born a couple years later and flourished in the 80s with cape cods and ranches and split levels. No one there lives below the poverty line. My own family moved out of the neighborhood and across town in 2001.

Entrance to Fox Chase, KY where I grew up.

I’ve set the scene for you. You already know that murders in Bullitt County are few and far between. Residents of Fox Chase know each other, and they wave when they see you. People don’t just get shot in Fox Chase. But that’s exactly what happened to 55-year old Donald Ash in January of 2009. And the weirdest part? His 2005 Lexus was missing from the scene.

1) Why hasn’t the police department updated the public on the status of this case? If they have, I can find no record of it online.

2) Cars don’t just disappear. Yes, they get stolen, hidden, and scrapped, but has this Lexus really not shown up in six years? Was anyone ever even looking for it?

It is interesting to note that the police chief of Pioneer Village was the rookie cop I told you about in the Jessica Dishon case. The last communication I have from him to the public on the case simply says they are “making progress”. That was reported on January 16, 2009.

All I can glean about Mr. Ash from the news coverage is that he was apparently the kind of guy who didn’t wave back when his neighbors passed. Also, he had been a technician at AT&T for 30 years and was also running a small business out of his home when he was killed.

Just for creep factor’s sake, I want to show you the house I grew up in. And then I want to show you Mr. Ash’s. My childhood home is marked by the yellow dot in the bottom right hand side of the picture, just a 3 minute leisurely walk to the murder scene. I can’t remember if even numbers were on the left or the right on his street, but Mr. Ash’s house is either the one marked by the red dot or the one across from it. 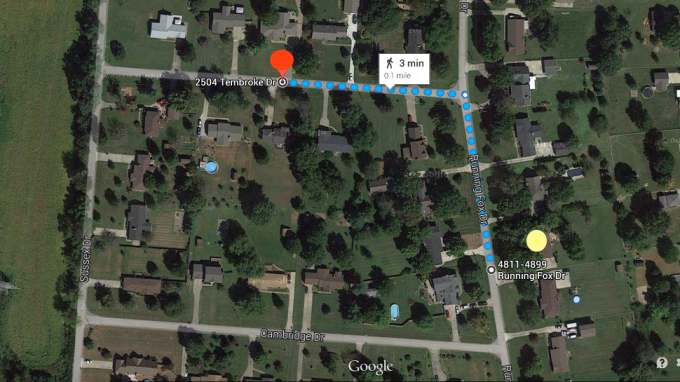 Map measuring the distance from my childhood home to the crime scene where Donald Ash, 55, was found shot and killed in his home in January of 2009.

The murder itself is unremarkable, at least insofar as it comes to murders. He was shot and found a day or so later. The police haven’t said much of anything, and the only thing of value they reported missing was Mr. Ash’s Lexus. But when you grow up down the street from a house that later becomes the scene of a murder, it’s a little unnerving.

Shit like that doesn’t go down in Bullitt County often. The fact that it happened in Fox Chase is unnerving to say the least.

I wasn’t sure whether or not Stanley Dishon would go to trial for murdering his niece, Jessica, back in 1999. As you recall me previously mentioning, this all occurred in my hometown of Shepherdsville, Kentucky. A couple days ago, the prosecution and defense reached an agreement; in return for Stanley Dishon submitting an Alford plea to manslaughter, the trial will be altogether forfeited. What is an Alford plea, you ask? (Hey, look, my college classes are coming in handy.)

Basically, an Alford plea is an alternative to pleading guilty, not guilty, or no contest. An Alford plea is the acknowledgement that the prosecution has enough evidence to convict you beyond a reasonable doubt. You can maintain your innocence, but for all intents and purposes, it is essentially a guilty plea without the actual admittance of guilt. It is the same plea the West Memphis Three wore forced to take. By submitting an Alford plea, you may be able to avoid the harshest punishment. Alford pleas work in favor of the prosecution sometimes because it saves the state money, and in this case, it puts an old case to rest; the media doesn’t get to keep dragging the public and the family through the emotional ringer of a trial.

Stanley will be eligible for parole in 16 years.

As for his motive? Word is that he was molesting Jessica and had been doing it for years. Considering his previous convictions, this wouldn’t be too surprising. The story goes that Jessica was threatening to tell, and Stanley attacked her in her yard.

Fifteen years in the making, y’all. Time to close the book on this one and pray the family can find some peace. I can’t imagine what her parents have been through, but to find the murderer is a member of your own family? It’s sickening.